As I've mentioned before, our Iceni server product is getting a big redesign at the moment - most of that work is centred around the user interface, but there are a few fundamental changes to the way some of the backend services work too.

Anyway, up until now I've been working to a UI design that I threw together - I'm completely unartistic, so that wasn't great, but it did allow me to get on with writing the new code. The new UI is built using the Smarty templating engine, so I expected to be able to apply a better design at a later date without too much trouble.  I didn't realise how little work it would actually be though - its only taken me about two days to completely replace the temporary interface with Sarah's new design.

She gave me the new design as a flat graphic, so the first job was to reproduce this as a web page, using HTML 5 and CSS.  A web page needs to be able to re-flow all the text and graphics to fit different sized web browsers, etc. which obviously the flat graphic prototype doesn't do, so it isn't a dead-simple job.  It also needs to be flexible enough to allow the layout to adjust to display different types of data.  It took about a day to figure out all the HTML and CSS, which I thought was pretty good going. 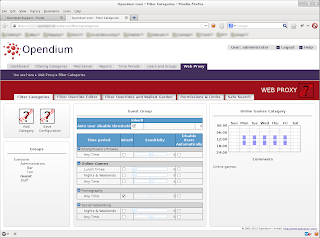 Today I've been going through the Iceni user interface code and replacing the old templates with the new design - a surprising amount of that is actually just a straight replacement.  Of course, a few bits and pieces needed tweaking to make them fit in with the new stuff, but I'm honestly quite impressed that I've got all that done today.

Here's a sneak-peak - there are a few missing graphics and some of the colours need fixing to properly integrate, but all in all I think its come along well.
Posted by Steve Hill at 17:23

Email ThisBlogThis!Share to TwitterShare to FacebookShare to Pinterest
Labels: Opendium