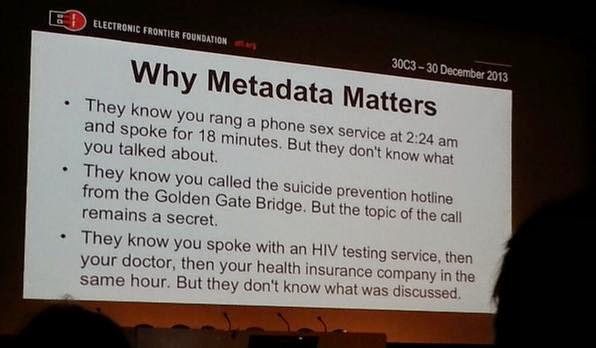 In April, the European Court of Justice ruled that the routine collection of location and traffic data about phone calls, texts, emails and internet use and its retention for between six months and two years meant a very detailed picture of an individual's private life could be constructed, that this amounted to a severe incursion of privacy and it therefore contravened EU law.

In response, the British government have put forward the Data Retention and Investigatory Powers (DRIP) bill to restore their ability to snoop on everyone.  Not wanting this bill to come under too much scrutiny, it was passed by the commons after a single afternoon's debate.  51 MPs voted to do their job properly and take time to make a decision, but they were overruled by 441 votes to just push it through as quickly as possible.  Assuming the Lords agree, this will pass into law tomorrow.

Once enacted, this legislation will allow the government to require internet service providers, internet application providers and telephone companies to record and retain metadata on any members of the public, without needing a warrant.  The bill would also apply to non-UK companies like Facebook (although quite how they expect to enforce this I'm not sure).

"The police will not know who that suspect is until they come to the police’s attention, at which point they have to get historical evidence. These days, part of that historical evidence will be in data records. They have to be able to access everybody’s data records in order to find those of one particular person, because the police, no more than the rest of us, are not given powers of clairvoyance with which to anticipate who is and who is not to be a suspect. Unless or until I hear from opponents of this Bill and of data retention how the police can be expected to identify in advance those who are going to be suspected of crime, I have to say that the whole logical basis of their argument completely falls away." - Jack Straw


Traditionally, a certain amount of information was kept by an ISP/telco/whatever for normal day to day business purposes. For example, a telco may keep call metadata records for a certain amount of time for billing purposes. If the police have a suspect then I see no issue with them getting a warrant to access that data.

If someone is a suspect, then I also see no problem with the police getting a warrant to record extra information that wouldn't normally be recorded/retained. e.g. they may get a warrant to have the ISP log web requests made by a suspect, or have the telco record call audio.

However, there is a distinction between the above examples, which require the police to suspect someone and convince a judge to issue a warrant, and what the government is increasingly trying to do, which is to capture data about *everyone's* activities, specifically for law enforcement purposes, just in case they later become a suspect.  That is something that's fundamentally wrong IMHO - as someone who has committed no crime, I have a right to privacy, and that right is being violated by having data recorded and retained for law enforcement purposes.

The whole "but it won't be used unless you become a suspect" argument is flawed - once the data is there, I have no confidence that access to it will be tightly controlled. Data may be leaked by accident, on purpose (illegally), the laws regarding under what circumstances it can be accessed may not be robust enough to prevent legal access for questionable purposes, and the whole thing is subject to feature creep - the access controls may be ok now, but I can't demand the historical data be deleted if their scope expands in the future.

Once upon a time, people were  considered innocent until proved guilty, but these days it seems that everyone is treated as guilty from the start and just happen to be allowed some freedom until the authorities can figure out what crime they committed.

All three main parties are backing this attack on our privacy, but is an afternoon of debate really enough to decide to throw away everyone's freedom?
Posted by Steve Hill at 13:22

Email ThisBlogThis!Share to TwitterShare to FacebookShare to Pinterest
Labels: Snooping